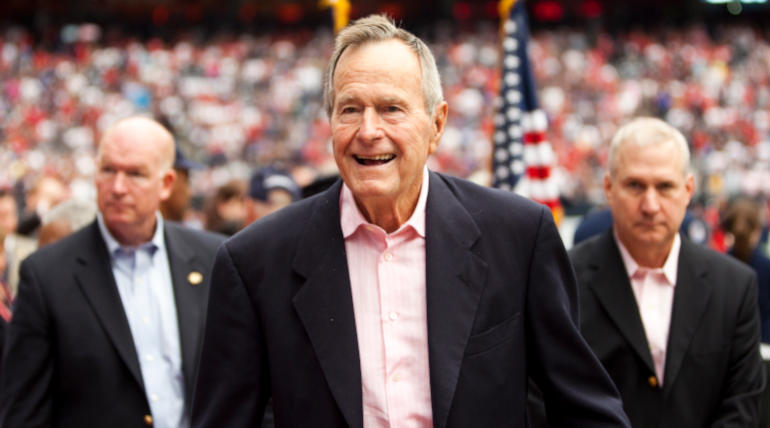 He is the father of Geroge W Bush who also became the 43rd President of the U.S. between January 20, 2001 - January 20, 2009. The spokesman of Bush family, Jim McGrath said Bush died shortly after 10 p.m. on Friday. It is been eight months since his wife Barbara Bush died at the age of 92.

Here is the official Statement from George W Bush announcing the death of his Father and 41st President of United States of America.

Died on November 30, 2018, at the age of 94, Bush is the longest-lived American President ever in the history. Bush was a Member of the U.S. House of Representatives from Texas's 7th district for four years from 1967. By 1971, he became the 10th United States Ambassador to the United Nations pursuing for nearly two years. Then he was elected as the 49th Chairman of the Republican National Committee after which he became the Chief of the U.S. Liaison Office to the People's Republic of China. At 1976, he became the 11th Director of Central Intelligence, leading to becoming the 43rd Vice President of the U.S.

At the age of 65, on January 1989, George HW Bush was elected as the President of the United States and served for 4 years. Bush was called as a pragmatic caretaker by the people who had a lack of long-term theme in administration. In 2001, his eldest son George W Bush became the 43rd President of the US and do differentiate them both, he used terms like George H. W. Bush, George Bush senior, Bush 41 etc.

Bush got 15 Honorary degrees totally and did a lot of achievements during his presidential period. During his inaugural address, while taking charge as the President, he said "I come before you and assume the Presidency at a moment rich with promise. We live in a peaceful, prosperous time, but we can make it better. For a new breeze is blowing, and a world refreshed by freedom seems reborn; for in man's heart, if not in fact, the day of the dictator is over. The totalitarian era is passing, its old ideas blown away like leaves from an ancient, lifeless tree. A new breeze is blowing, and a nation refreshed by freedom stands ready to push on. There is new ground to be broken, and new action to be taken"

During his presidential period, Bush signed some major bills to act by signing Americans with Disabilities Act of 1990, Civil Rights Act of 1991, Radiation Exposure Compensation Act, Clean Air Act and the highly acclaimed Immigration Act of 1990, which resulted in a 40 percent increase in legal immigration to the U.S.

Time magazine named him the Man of the Year in 1990 and in 1991, the U.S. Navy Memorial Foundation awarded him the Lone Sailor Award for his naval and Government service. In 1993, became an Honorary Knight Grand Cross by Queen Elizabeth II. He got the PGA Tour Lifetime Achievement Award in 2009.

He also got some sexual misconduct allegation during the Me too movement for which Bush apologized through his spokesperson. After the death of his wife in April 2018, he was hospitalized with a blood infection and after a month of time, he was admitted in the hospital for fatigue and low blood pressure.

The former president suffered from vascular parkinsonism that made him settle on a motorized scooter 2012. The days before his death he was treated for the low blood pressure and died on November 30, 2018, at the family compound in Maine.