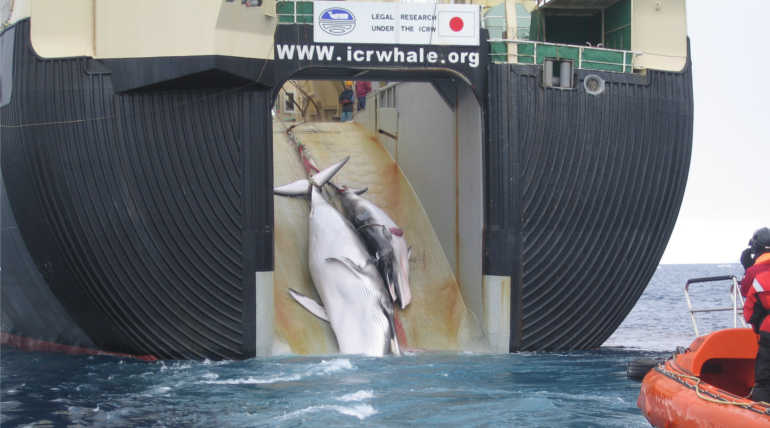 Whales are one of the prominent regulators of the food chain in the oceans around the globe and reduce the risks of overpopulation in particular species. But humans find Some Other Cruel Ways to utilize those whales commercially. The commercial thought boosted the culture of whale hunting known as Whaling in the late 19th century. But humans started killing whales to utilize them in the much earlier period, according to records the form dates back to early 3000BC.

Humans started hunting those large mammalian species for their blubber to extract oil for lamps, cosmetics, and perfumes. Their bones to make art materials, to build huts and utensils. Their meat as food for humans and as well as for animals and recently whales have been killed for research purpose too.

Actually, the act of Whaling, hunting whales for commercial use became more prominent and one of the important business in the 19th century. Hence historians marked the 19th century as the dark period of whales where nearly 236,000 whales were killed and pushed the large underwater mammals towards the verge of extinction.

After a long time period, in the near end of the early 20th century in 1946, the International Convention for the Regulation of Whaling came up with an international body called International Whaling Commission to regulate Whaling. The commission that highlighted the consequences of commercial Whaling and claimed a strong restriction in 1986. But some of the countries like Norway, Iceland, and Japan who are the members of IWC later stepped out from the commission and started commercial whaling.

Those countries fixed themselves a limitation or may be a target in their commercial whale hunting. But that limitations they fixed seems to be going up and up every year and the killings of whales kept going up and up. Norway stepped out from the IWC by saying they won't able to stop commercial whale hunting and became one of the best harpooners. But Japan had other ideas, initially, Japan signed the IWC's moratorium but also launched a Scientific Whaling Program soon after the IWC initiated the ban on commercial whaling and became a good grenade tripped harpooners.

The scientific whaling program that let Japanese whalers to kill whales in the name of science. But widely the program is known popularly as the outfit of Japan's commercial whaling. Iceland also followed the footstep of Japan by starting a scientific Whaling Program and later resumed the direct commercial whaling.

The IWC had published some recent reports of Japanese Summer Whaling, a part of Scientific Whaling Program. The record claims that Japan had killed nearly 333 minke whales by utilizing the loophole of IWC agreement.

Japan used to launch its annual whale hunting in the name of scientific research every year. This year the annual summer hunt lasted for 143 days and ended up in killing more than enough minke whales for scientific research. Another shocking thing that grabbed the eyes in the reports released by the IWC is that Japan killed 120 female whales that are found to be pregnant. Also the IWC stated that nearly 114 immature male and female whales have been killed by the Japanese whaling fleet.

Japanese whaling community has been warned to stop the illegal killing of whales numerous times. They simply regretted the rule of international court of justice in 2014 and resumed their hunting in Antartic region in 2015. Especially they enjoyed the whale hunting by killing them in a brutal way by using explosives and improved harpoon in catching the whales.

According to reports Japanese fleet catches the Whales, take them to some research centers and later sell them for their meat, bone, and oil at the end of the research. This is how Japanese scientific Whaling Program works in a commercial way.

Whales are known as the largest species on the earth but these type of illegal hunting pushes some exotic species towards extinction. Now nearly more than 15 whale species have been marked as endangered.

Experts suggesting that if these kinds of illegal hunting kept continued than our future generation will have to witness a large earth mammal only through textbooks and videos. Now this summer whaling of Japan has prompted severe action to save the endangered species.