Stephen Hawking, the late British physicist, died at the age of 76 due to Motor Neurone Disease and he used his wheelchair for his locomotion.  His works include gravitational singularity theorems and his prediction named as Hawking radiation.

His Wheel Chair has been auditioned on November 8, for a huge amount of $391,740. Auction house Christie's ran the online auction for almost nine days in order to raise the funds for charity purpose of Stephen Hawking Foundation and the Motor Neurone Disease Association. 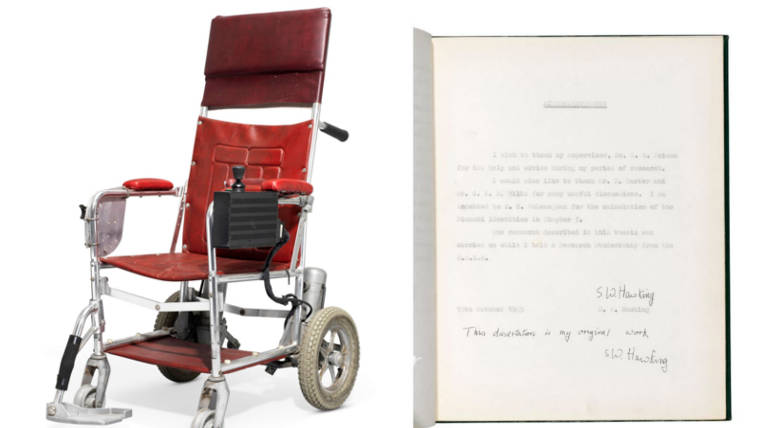 Stephen Hawkings Wheelchair and Thesis at the Auction House Christies

Other belongings of him including medals and awards, his book with his thumb impression "Brief History of Time" were also auctioned.  His dissertation of 117 pages named ï¿½Properties of expanding universesï¿½ was sold for 584,750 pounds.  The actual estimated value of these articles is not more than 150,000 pounds.

The electronic voice synthesizer is one of the most famous factors that makes the name Stephen Hawking for ages. Fans of the scientist were excited to buy his possessions in his memory after the legend has passed the world.

The Auction House Christie's Head of the Books and Manuscripts department, Thomas Venning said to a media that the legendary Stephen Hawking was a huge personality worldwide and had an amazing ability to connect with people with his brilliance and knowledge over science.