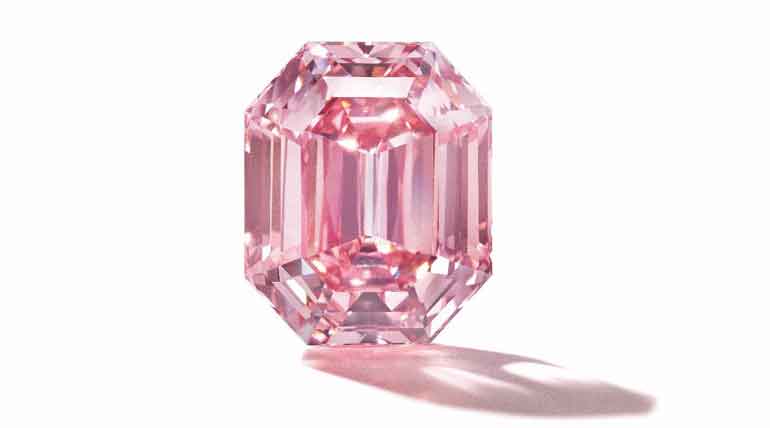 A 19-carat pink diamond that is rare to a greater degree, was sold  for $50 Million in Christie's annual Magnificent Jewels auction. It becomes the third most expensive diamond ever sold, sets a world record for price paid per carat for a pink diamond at an auction. Christie's International Head of Jewelry, Rahul Kadakia, said that it was bought by US luxury brand Harry Winston, and will be renamed as "Winston Pink Legacy".

The beautiful vivid pink diamond is a rectangular cut and is called "The Pink Legacy". The British auction house, made an announcement about the auction in twitter on 25th September.

Rahul Kadakia, International Head of Jewellery at Christie's, announced in their official website that the diamond is going to make an auction history. He says, "The saturation, the intensity of this stone is as good as it gets in a colored diamond. To find a diamond of this size with this color is pretty much unreal. Only four over 10 carats in size have ever come up for auction in 250 years. You may see this color in a pink diamond of less than one carat. But this is almost 19 carats and its as pink as can be. Its unbelievable. This incomparable pink diamond has descended from the Oppenheimer Family and its sale will be a major moment in auction history."

Like Rahul states, the diamond belonged to the Oppenheimer Family, who controlled the world through their De Beers diamond mining company in the 1920s. The Christie's, however, did not reveal who the current owner is.

This beautiful diamond has created vibes among its fans. Tom Moses, Executive Vice President Gemological Institute of America, has made a comment on this stunning piece - "Pink diamonds of any size and depth of color have always had a special allure. This 18.96-carat emerald cut pink diamond is amongst the rarest of all gemstones"

International jewelry specialist at Christie's, Jean-Marc Lunel, told AFP that it is probably the most beautiful (specimen) ever presented at public auction.

However, The Pink Legacy won't be the costliest diamond ever sold, since the  59.60 carat "Pink Star" holds that honor, sold for $71.2 million at a Sotheby's auction in Hong Kong last year. The Oppenheimer Blue diamond, which sold for $57.2 million in 2016, is the second most expensive diamond ever sold.