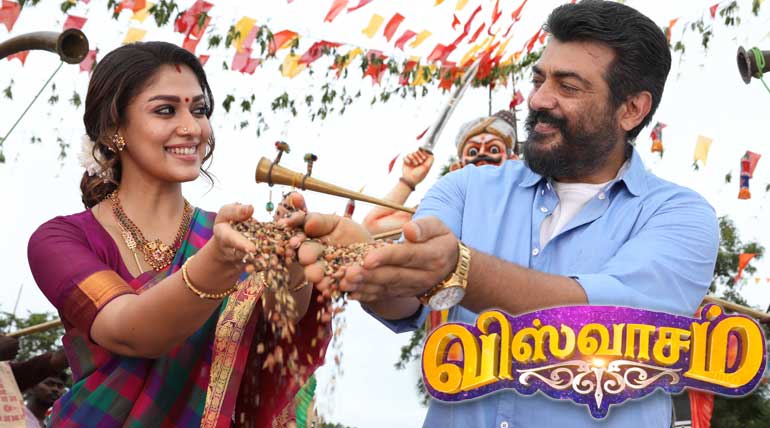 Viswasam is the upcoming film of Ajith - Siva combo bankrolled by Satya Jyothi Films releasing for the Pongal festival all over the world. The movie stars Thala Ajith, Lady Superstar Nayanthara in lead roles along with a gallery of supporting actors including Sathyaraj, Prabhu, Jagapathi Babu, Thambi Ramaiya. The recent update from the camp is the name of Nayanthara in the film is been out and trending on the Internet.

Niranjana is known to be the name of Nayan in the film while Thala Ajithâ€™s name in the film is already revealed in the motion poster as Thooku Durai. All the actors in the film are playing with two different looks and it is still unclear about what is there in the film. A teaser is the only thing fans are looking forward at the moment to see Ajith back to a rural mass avatar.

Read More: Viswasam Censored with U-certificate without any Cuts

The film is highly anticipated to be released on January 10, 2019, for the Pongal weekend, directly clashing with Superstar Rajinikanthâ€™s most awaited Petta. The teaser of Petta was already released earlier this month and created the much-needed hype already. Now it is up to Viswasam camp to make some excitements with a massy glimpse.

The teaser was said to be released in a maximum 10 days of the time when director Siva said it on stage in a media program. It is been a week since the maker said it and going by the time, the teaser should drop in a couple of days while it is also speculated to be released on the New Year night. After Petta trailer announcement, the team might prefer for a solo spotlight and release on the auspicious night.