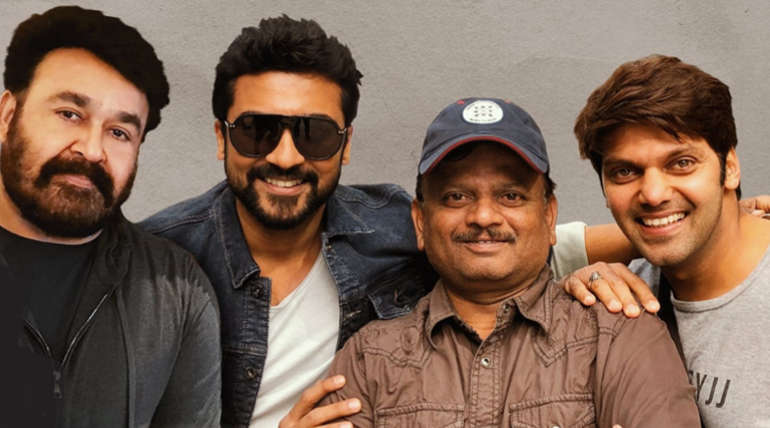 The upcoming movie of the promising Suriya - K V Anand combo is moving at a rapid pace as the team is shooting back to back schedules from the beginning. The recent update about the film is that the director of the film KV has reached out to social media to ask for a title suggestion from fans.

It is out of a surprise for everyone when a director of a big film asks for fans suggestions for the title. Not just suggestions but he revealed the three tentative titles of the film currently under consideration and started a poll with those titles. The titles are Meetpaan, Kaapaan and UirKa as said by the maker himself.

Breaking- Suriya 37 Movie Title to be Announced on?

The poll is running crucially with the last title UirKa leading by 43% fo9llowed by Kaapaan (34%) and Meetpaan (23%). 14,000 votes have been polled so far as of now and it will be interesting to wait and see if the makers consider the fans' opinion and round off the final decision for the title. The poll tweet by the cinematographer turned director is shared at the bottom of this article.

The movie is said to be a thriller film in which Suriya plays as a commando, Mohanlal as the Prime Minister of India and Sayyesha is playing the female lead. Actor Arya is also playing an important role in the film while the regular combo of the duo Harris Jeyaraj is composing the music for Suriya 37. The film was earlier expected to be released by April 2019 while the delay of the actor's upcoming film NGK has pushed this film release further to the end of 2019.

Suriya is currently shooting the final schedule for NGK directed by Selvaragavan produced by Dream Warrior Pictures. The political thriller is facing a lot of delays from the beginning and finally nearing the completion. Release plans are not yet revealed by the team as they aren't clear about it yet, April 2019 is being considered as the date of priority while fans are eagerly waiting for an update from the team.