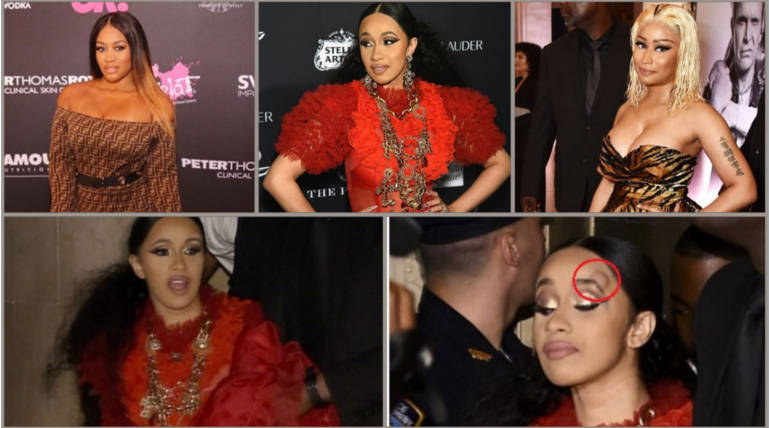 The NYFW Party held in Harper’s Bazaar took place on Friday night while the fight broke between Cardi B and Nicki Minaj as being spread in the social media. It is known that the rappers Cardi and Nicki have misunderstandings according to their interviews earlier this year, fans and media just blew the problem as a big issue forming them as arch-rivals.

The Harper’s Bazaar fashion week got a lot of celebrities visiting and even before the event starts, people in social media kept buzzing about the presence of both singers in a single event and was waiting for a scene to happen involving each other (either in a positive or negative way). As expected, a fight broke at the party for a few seconds.

The video (shared below) shows the havoc between a small crowd where Cardi was seen while the one in the other end of the fight seems to be Rah Ali who hit Cardi for unknown reasons, according to the people who witnessed the incident. Rah Ali, a TV Personality is also an armed security officer who is currently working as security for her friend Nicki Minaj.

Contrary to the reports spread, sources suggest that Cardi B approached Nick Minaj’s table to say something while an argument broke and turned to a physical brawl. Cardi’s men said she wanted to say Nicki to stop telling lies about her through media while Minaj's securities were told to avoid Cardi from nearing her and it was those securities who harmed Cardi when she started as "Let me tell you something..."

Though the scene isn’t clearly seen in the video, at the time of 0.08 second, Nicki Minaj can be found standing at the left side behind a security while Cardi was yelling at Rah Ali which can be seen in the footage meanwhile Cardi B was escorted out from the fight and she was safely taken to her car with torn dress.

After the incident, Cardi B left from the spot and went to her Hotel room while Nicki Minaj stayed inside the building and when she left after the event, Nicki posted a video through Instagram showing off some attractive poses which is shared below while Cardi B shared her message about the incident and the way she got humiliated because of the comments on her motherhood. Check out the Insta Posts from both the celebs and the video.