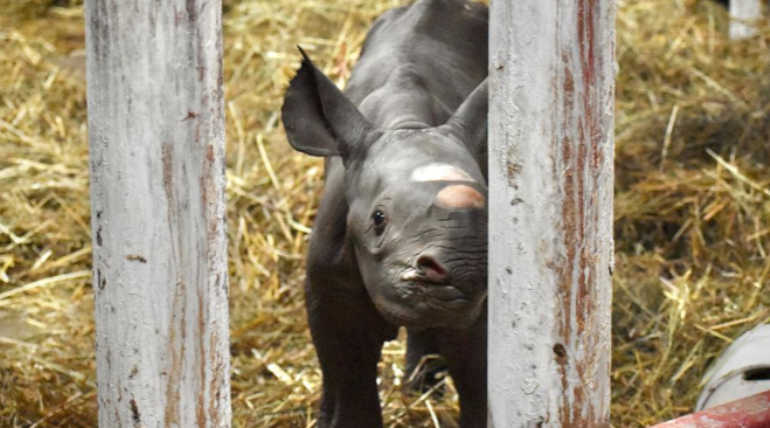 Being a critically endangered species unnamed Black Rhino birth brings happiness to the Zoo affiliates as it holds the first Black Rhino in Michigan's Potter Park.

The male calf was born on Christmas day at 5:40 a.m in the Potter Park Zoo, located in Michigan. The zoo officials released a video holding the birth journey of the Black Rhino that happened that day, stating it as the first pregnancy for the baby calf's mother, Doppsee. The Father of the male calf Black Rhino is Phineus which came from Texas to Michigan zoo in 2017.

Currently, only 5000 Black Rhinos left in the world wildlife categorized as the critically endangered organisms stepping slowly to extinction list. But a new hope must have born in the conservationists and Zoos who still working on the Black Rhinos' existence in nature after the birth of their species to add one more on the endangering lists.

"As this is Doppseeâ€™s first pregnancy, the animal care, and veterinary staff will continue to monitor Doppsee and her calf closely in the next few weeks," says Potter Park Zoo veterinarian Dr. Ronan Eustace. But the calf remains healthy to date, and the calf stepped its first walk at 7:04 a.m in the Christmas eve whose birth considered as a Santa gift among the zoo staff.

"This is a monumental moment for Potter Park Zoo that has taken our staff years of planning and hard work," director Cynthia Wagner overwhelms with Black Rhino birth as a conservatory step.

Poaching eradicated countless Black Rhinos around the world, and British soldiers of the 2nd Battalion Royal Gurkha Rifles as a preserving step moved 17 of the critically endangered species via air and road from KwaZulu-Natal South Africa to Liwonde National Park in Malawi.

Major Jez England, the officer commanding the British Army counter-poaching team in Liwonde, says the operation has been successful with the three months training of rangers to keep them safe. He also added that patrolling large areas provides a huge opportunity for the soldiers to get trained in a challenging environment.