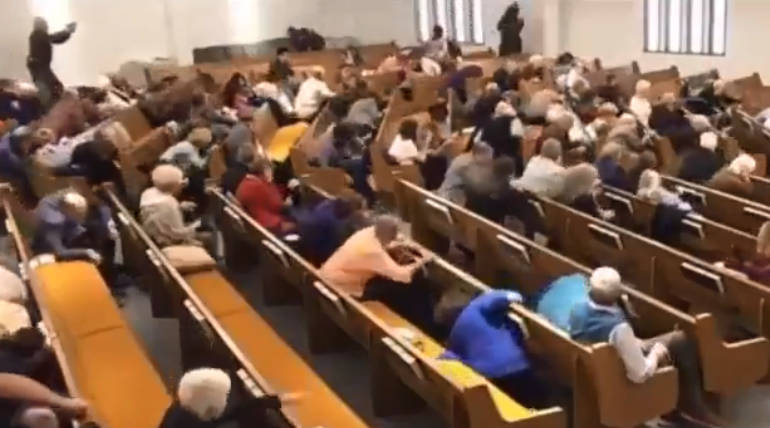 Three killed in Texas church shooting live on YouTube: Shootings continue unabated in the US to increase to 409 in 2019. Yesterday, December 29, three people shot dead in a church in Texas, including the suspected shooter. The church service was streaming online on YouTube when the shooting occurred. But now the video has been deleted.

It was a quiet Sunday morning service at the West Freeway Church in White Settlement outside Fort Worth in Texas. The Sunday service was streaming online on YouTube. As part of the service communion, church members were passing around wafer plates. At 11:30 AM, a man wearing a long dark coat got up from the backside of the room and took his shot gu out.

He walked to a man who was leaning against the wall and shot him point-blank. Then he shot another man who was nearby. Then he turned his gun towards those sitting in the room and shot another round that left another person dead and one fatally injured. A fellow churchgoer (security officer) shot the gunman down shortly after he shot the three. All the visuals were available in the deleted video footage. Police did not much reveal about the details of the shootout. But sources say that the killer could be a local resident.

Greg Abbott, the Texas Governor, asked everyone to pray for the victim and their loved ones. He also thanked the church member for shooting the killer, which prevented further loss of life.

Beto Orourke, a former Democratic presidential candidate from Texas, said he is saddened to hear about the shooting. Many others also expressed their grief and condolences for the victims of the Texas shooting victims.

Texas is not new to church shootings. In 2017 also more than a dozen worshippers were killed at a church in Sutherland Springs when a Devin Patrick Kelly opened fire on the congregation of the church and even took his own life.