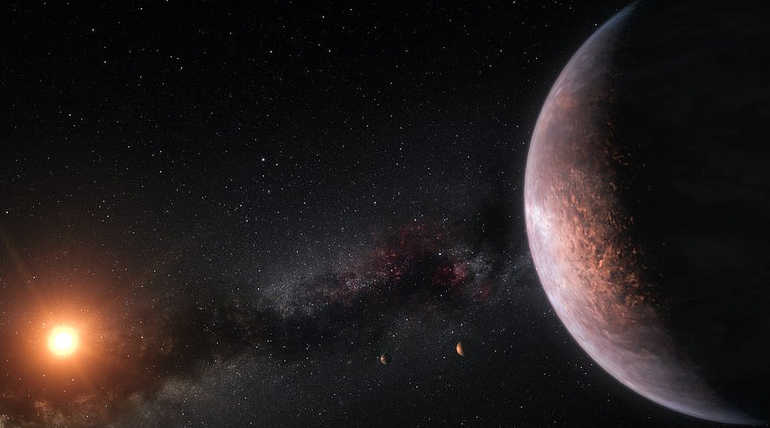 TRAPPIST 1 Is Much Likely To Hold Alien Life In Its Planets. Illustration Image

Even though the red dwarf star called TRAPPIST-1 is discovered in 1999 the full planet properties have been documented only in 2017. Since its discovery, the TRAPPIST-1 has created more curiosity among the astronomers around the world as the size of its planets and our own solar system like design had pulled the astronomers and astrophysicists towards it.

Since the human kind started its hunting of Earth-like planets and extraterrestrial life in space they have discovered thousands of exoplanets. Some are close and some are unimaginably far from our solar system. TRAPPIST -1 is one among them but its a star that holds seven planets merely like our solar system.

TRAPPIST-1 is first spotted by some Astronomers in the Aquarius constellation that glittering at the distance of 39.6 million light-years away a little bit closer to the earth. But the Spitzer Space Telescope that probed the TRAPPIST-1 gave enough information about the unique planetary system.

According to the exoplanet researchers among the seven planets of TRAPPIST-1 first three of the planets are much likely to be a habitable zone. In recent studies, the scientists who are scratching the dwarf star's planets have concluded that some them seemed to be composed of water nearly 250 times more than the earth's water quantity.

Some scientists also lift up the doubt that the habitual zone if those planets may possibly hold alien life. Hence the NASA and the European Space Agency ESA has planned to launch the James Webb Telescope that possesses the ability to hunt the life expectancy of those planets by detecting the temperature of those planets. Also, the European Space Agency funded project known as SPECULOOS will be initiated for the search of extraterrestrial life beyond the earth in coming years.

Ther are so many exoplanets in the wide space but there is a common question that why scientists are so keen to probe extraterrestrial life only in the planets of TRAPPIST-1? Because they believe that the structure and size of those planets are mostly resembling the earth and the hydrogen deficit atmosphere of those planets are far enough to harbor a biological life. They are hoping that the secrets of those planets will be deciphered soon as possible.

According to a study, each and, every star out there may possibly hold a planet so there are a lot of stars out there and still, a lot of planets lined up in the horizon to probe extraterrestrial life.