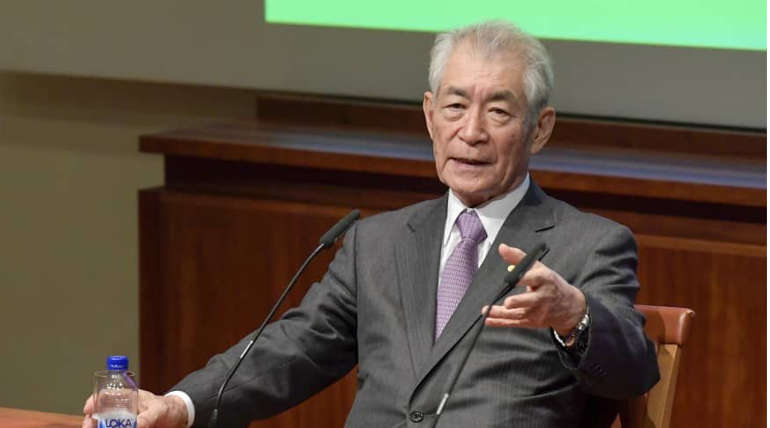 Tasuku Honjo,76,  Japanese immunologist and Scientist received the Nobel Prize in physiology for the discovery that showed the way for a new approach to cancer treatment.

Honjo with his wife Shigeko accepts the medal and diploma from Swedish King Carl XVI Gustaf at a ceremony Monday in Stockholm. He dressed in traditional Japanese clothing to remember the root of his research. He shared the prize with James Allison, a professor at the University of Texas, who also studied a CTLA-4 protein that works as a brake on the immune system.  Both received 9 million Swedish kronor ($999,000) as a prize.

The Kyoto University professor and deputy director Honjo said in his speech at the Lavish Nobel Banquet in which thousands of people attended, "we sincerely hope this treatment will reach far and wide so that everybody on our planet can benefit from this evolutionary gift for a healthy life"

PD- 1 is a type of protein Honjo discovered along with his team in 1992 and it led to the development of Opdivo, the drug that boosts the immune system to attack the cancer cells unlike chemotherapy which kills both cancerous cells and healthy cells

Honjo is the 27th Japan-born winner of a Nobel Prize. Yoshinori Osumi was the previous Japanese in the same physiology or medicine prize, in 2016.

Honjo said in his speech, "Jim and I have experienced many occasions that have made us feel well rewarded, such as meeting cancer patients who say their lives were saved by our therapies."

Then he added "the development of our discovery is just beginning, as currently, only 20 to 30 percent of patients respond to immunotherapy. Cancer has been the No. 1 cause of death during the last half-century. The trend is getting even worse as the average lifespan increases. We encourage many more scientists to join us in our efforts to keep improving cancer immunotherapy."

"I am pretty sure by the mid-century by 2050, almost all cancers will be treated by immunotherapy in one way or another. In current efforts, I hope will succeed but in the future, we never know there might be some other combinations but I think immune power is the basis for the fight against cancer. That's what i believe", Honjo Concluded.