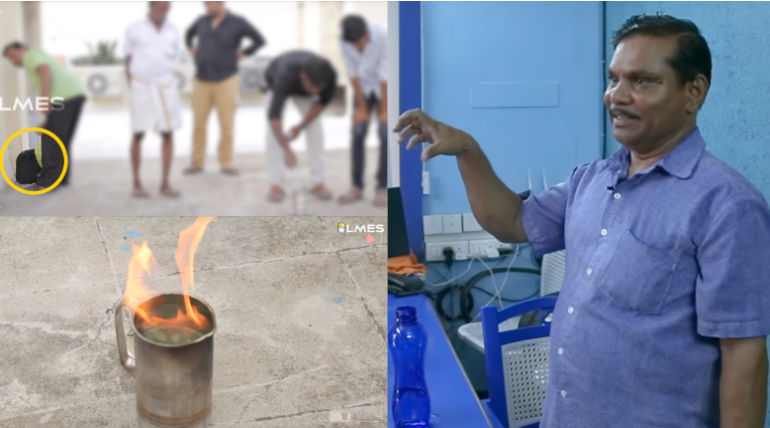 South Indian man from Tamilnadu, Ramar Pillai is once again popping up his head for bringing his project into existence after claiming to transmute water into gasoline with his herbal formula. A video has exposed the decades-old mystery of Herbal gasoline claim by Ramar Pillai and showed the real technique handled by him to make it possible.

In 1996, Ramar Pillai made headlines with his new project that would provide Petrol and Diesel for INR 5 at that time. People were surprised and confused with the man's claim while he appealed to various government and private organizations for the project and became a sensation at that time.

When none of the concerned authority approved his project for various reasons, In 2016 the man along with his associates was sentenced 3 years for fraudulent activities of selling fake petrol to the public. He was also accused of gaining funds, about 2 crores from private organizations for this project. Many political leaders supported Ramar Pillai and people thought that the man is being ignored by authorities for the beneficiary of corporates in India.

While all these claims and beliefs are at stake, a youtube channel has exposed the claim of Ramar Pillai by making him execute his project in front of the camera. The video was said to be started on the purpose of knowing about the Herbal Gasoline project, but closely looking at the video, the team found some interesting facts and cleared all the controversy around this issue.

First When Ramar used his own accessories to burn the water, the team weren't satisfied and after looking at the video in the editing table they were of his fake methods to execute the project. He used wax and sometimes a spirit to show the burning process. His claims of extracting hydrogen from the water and combining it with the carbon in the air is highly impossible at natural atmosphere with just a herbal stick.

Then the team visited Ramar Pillai to their office to show his project in front of everyone where they found out his tricky methods by sneaking at his bag. Also, the team seemed to have enquired the IIT regarding his case and they responded with the same wax technique used by him. The video cleared the long-standing mystery among public making people aware of the reality showing how hard it is to make an energy source.