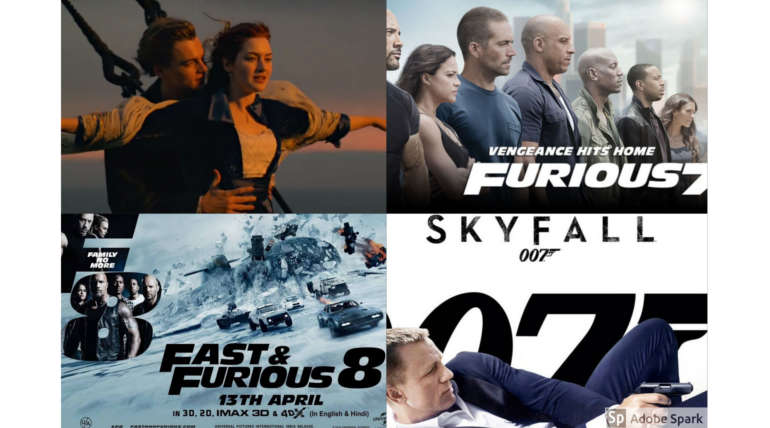 $1 billion box office is a coveted tag of Hollywood, which is not touched by many films but a set of films in the past decade. If you look into the list, almost all those films will end up as a super-hero film or an animation film and also with a lot of fantasy films. Apart from Animation films, the Marvel films along with Harry potter and Pirates of Carribean franchise films dominate this list. Now let's see the only films without these factors which entered the $1 billion club.

Skyfall is a British-American Spy Thriller film which is based on the fictional character James Bond, the Espionage field agent. The movie stars Daniel Craig as Bond and directed by Sam Mendes. The James Bond brand helped this film get wide anticipations around the world which helped for a huge opening weekend of more than $88 million. The movie emerged as one of best James bond films with latest technologies and went on to become a huge blockbuster. The film is made in a budget of $200 million and collected a total of $1,108,561,013 in the worldwide box office. This is the first and only James bond film in the $1 billion club.

Fast and Furious is undoubtedly the biggest franchise for action films in the world having a tremendous international market comparing to the domestic market. Racing factor is one element which gained a huge fan following for the brand around the world.  Made in a budget of $250 million, the movie wasn’t received well among critics, though it collected big as like a usual FF film and made $1,235,761,498 at the box office. But it couldn’t beat the collections of the previous part the franchise which is the next in this list.

Furious 7 is by far the most collected film of Fast and Furious and it is the 1st film of the franchise to enter the $1 billion club worldwide. The movie was celebrated by fans for its spellbinding action sequences. The movie had a terrific opening of around $147 around the globe with international markets dominating over the domestic. The budget of the movie is $190 million and collected $1,516,045,911 worldwide in its final run which is still one of biggest blockbusters of all-time in Hollywood

The film which released 2 decades and still ruling the box office record is one moment which makes the film written in history along with people’s heart. The success of this film can never be measured in numbers, it was released in the year 1997 made with a budget of $200 million, the film made unbeatable records at international box office. The movie garnered a cult following till now and topped all markets during its release time. It collected a mere $2,187,463,944 worldwide and still remains as the 2nd most collected film of all-time, behind Avatar (Sci-fi fantasy film) which broke the record in 2009 by the same director James Cameron.