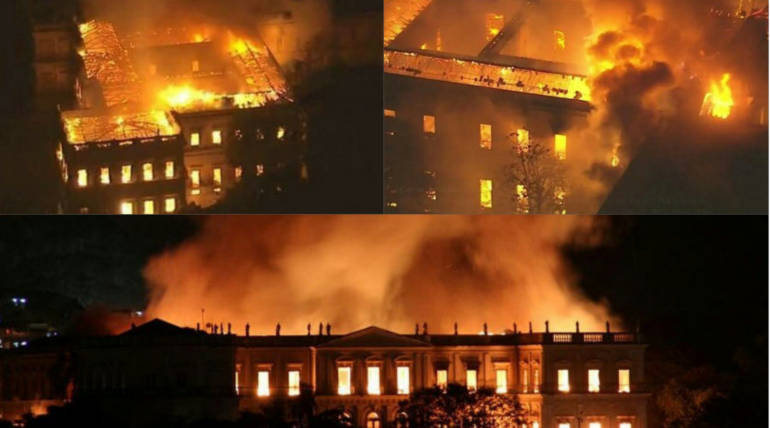 Ablaze broke at the national museum of Brazil in the Rio de Janeiro on the Sunday evening which destroyed the building and the properties completely over night. The museum is said to be 200 years old and the properties in the museum were said to be priceless that turned into ashes after a sudden fire broke out in the museum. No injuries or human casualties were reported in the fire.

While the reason for the fire is still unclear, people in social media claim it as a result of poor maintenance by the government of Brazil. The museum reportedly consists of 20 million items that are archaeological properties of the nation to protect the history of the nation for future reference and considered as one of the nation’s pride too.

The fire is said to have broken out during the time around 7 pm on Sunday, after the visitors of the museum left by 5 pm closing time. Some of the materials in Museum were saved with the help of workers while it doesn’t come close to the number of historical properties destroyed by the fire.

The firefighters worked hard to get the fire under control in midnight, Fire department spokesman Roberto Robadey said that water was brought from the nearby lakes to control the fire as the hydrants near the museum were not working.

The director of the museum Alexander Kellner called it as an enormous tragedy in his Facebook post. According to the Mayor of Rio, Marcelo Crivella –The incident is a national obligation to reconstruct the museum and eternal detail of the paintings and photos from the ashes. It is a national loss more than a museum it is a complete history of Brazil protected for two centuries built in 1818.

People in social media are expressing their outpour of dissatisfaction on the Government for not maintaining a national property responsibly and calling it as a corrupt and an act of mismanagement that lead to such a miserable loss for the people and nation. The loss of cultural and educational values along with the museum has deeply saddened the people of Brazil seeing their reactions in social media.

20 million pieces in the collection. 200 years of existence. The largest museum in america being consumed by fire. Due to lack of money from the government and the disregard of the authorities, the National Museum of Brazil turned to ashes. Part of the history has been lost today pic.twitter.com/EJZFGX26XM

Oldest human remains and some of Egypt’s greatest artifacts gone in a museum fire in Brazil. 20 million items lost. This is what happens when you have a corrupt government #wow

Corruption, mismanagement...
The museum was craving basic maintenance for years, but the government neglected it as it does with education, art and science in general.