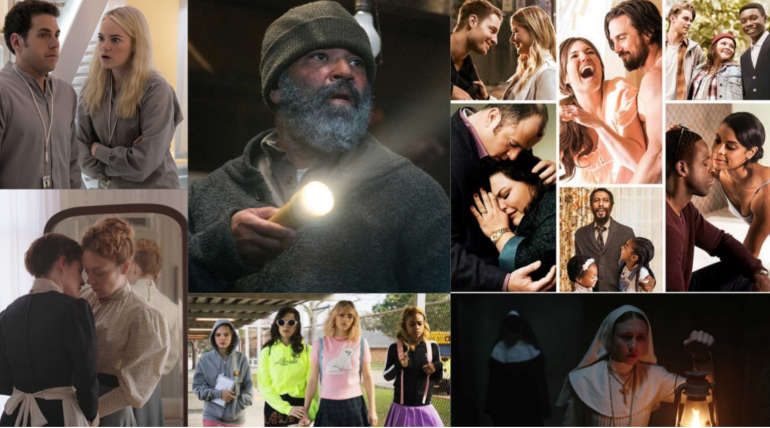 Here is the list of 10 movies along with Television series, releasing in the month of September that is most anticipated and promises quality stuff for the audience going by the early reports and glimpses. The list includes movies releasing in both theatres and Netflix platform and TV shows that are to be premiered. Some of these films trailers are posted at the bottom of the article.

Lizzie is a psychological thriller based on the real story on Lizzie Borden who was accused and late acquitted for the axe-murders committed by her father and stepmom in Massachusetts. It is made as an engaging thriller with Kirsten Stewart and Chloe Sevigny as intimate lovers in the dark thriller. The movie is screened in the Sundance film festival and getting great reports while it is slated for theatrical release on 14 September.

The Horror Spin-off from the blockbuster Conjuring franchise is releasing on September 7 with a huge buzz around the film from worldwide Horror fans seeing the scintillating trailer and glimpses of the film. Trade circle are expecting big box office numbers for a horror film.

The fans favourite alien action thriller is coming with a kickass style this time with a fun-filled adventure film. The trailer of the film released recently and impressed the audience like never before for the film. It is releasing on September 14 worldwide and a monstrous opening is expected.

The Crime drama series is well acclaimed for the season 1 and the brand has created some positive vibes around the season 2. The trailer looked delightful and a true cinematic series and Vandal is back of course for the premieres to start from September 14.

A town which is broke with violence with leaked private photos of every citizens and group of teenage girls taking the centre stage to engage this satirical thriller is very exciting to catch out for the offbeat treatment of the film. The film is releasing in US theatres by September 21.

The Netflix film is loosely based on a Norwegian TV series and is touted to be a sci-fi crime drama starring Jonah Hill, Emma Stone in lead roles when they both deal with a mysterious pharmaceutical trial that turns out to be a suspense-filled journey. It is releasing in the Netflix platform on September 21.

John Reilly, Joaquin Phoenix and Jake Gyllenhaal starrer Western film is based on a novel written by Patrick DeWitt. The film travels across the period of the 1850s where the lead actors play as the notorious Assassins Eli and Charlie Sisters. The movie is scheduled to release on September 21.

Season 3 of the rom-com drama is most looked forward by the fans as the first 2 seasons entertained with its unique and emotional story-telling, and the relationship between the lead couples. The series is telecasted in the NBC starting from 25th September.

Kirsten Bell starrer Fantasy Comedy series is seeing its premieres of season 3 starting from September 27 on NBC. Kirsten as Eleanor Shellstrop struggles to define the good and earn her deserving place to live.

The Wolf Thriller is already been said enough about the plot of the film while it is expected to thrill the audience with spine-chilling sequences that tell the story of a hunter who is hired by a mother to track down and kill the wolves which killed their young son. It is releasing on Netflix by September 28 and is eagerly awaited.