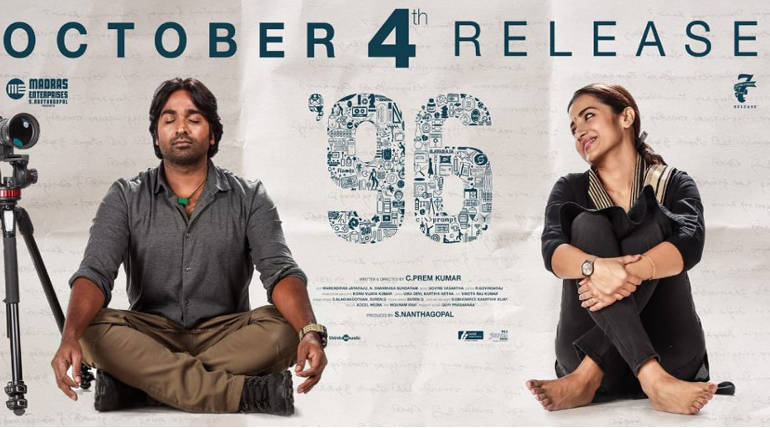 A beautiful idea made as a story happening in a single night that brings together a soulful making, music and top class performances. Ram (Vijay Sethupathi) a travelling photographer is living a life of passion enjoying each moment that is easily conveyed through the opening song life of ram filled with delighted music and similar visuals. Things start picking up when Ram incidentally goes to his high school in hometown and gets the taste of his school memories. Memories make him call his school friend and that's where a reunion is planned when their WhatsApp group gets active.

The whole sequence from the moment Ram enters the school gets back the nostalgia of everyone along with the actors from where the director starts making the audience feel how he wants to and travel back to their memory lane. Two months from the conversation, the reunion happens and at the point when Ram gets reminded of Janu by his friends, (Trisha) the flashback of the school days comes onscreen. The actors who played the young characters of Ram and Janu were outstandingly performing and set a fantastic chemistry for the feel of love the characters were carrying for more than two decades.

Trisha's introduction gets a massive elevation after the lovely flashback and through the midway of the film, is where the idea of the film where it travels throughout is made clear and it is a single night experience from there on and the school time lovers start to spend their night without thinking about the end of dawn like the audience feel in similar way of experiencing the moments from there on.

The director has made each scene with a complete love, capturing each beautiful moments that is evident through the laughs, smiles and emotion that we naturally express while watching. The second half of the film completely has only two leads performing onscreen with a masterclass music by debutant Govind Vasantha who was exceptional with the bgm and songs giving a highlight to the performance and the pretty voice of Chinamayi is heard throughout the film as Janu's voice and songs.

Poetic treatment with solid writing can be seen through the way the long conversations engage us completely. The revelations from Janu and Ram at two different point of view in Janu's room was a hard-hitting sequence and the directorial touch of Premkumar shines at that scene. The whole idea of the film lies on the feeling of the leads for each other irrespective of the fate that is written already.

Through the end of the film, the two actors were left on their own to perform and they both were showing a magical performance driving the audience deeply emotional and teleporting the feel from screen to the viewer making everyone emotional. A matured way of love written by the director and a completely realistic performance with a soulful background music makes 96' a poetic emotionally driven romantic drama leaving the audience with a heavy heart and might connect with their real-life memories too.

More than words revealing the story it's better to experience the movie visually like the film conveyed things through eyes and music more than it did with dialogues. Overall its an experience that needs to be felt and more than terming it as a youngsters film, it deserves a watch from the aged to enjoy the poetic nostalgia of bringing back their memories. 96' leaves a strong mark in the heart that is hard to move on and as the end of the film, life is all about cherishing memories and moments that shouldn't be missed to enjoy.

A must watch drama that stands in heart for a long time and an experience of life shown in a single night with two characters that expresses more feel than a decade of screen time and a bunch of cast could offer.