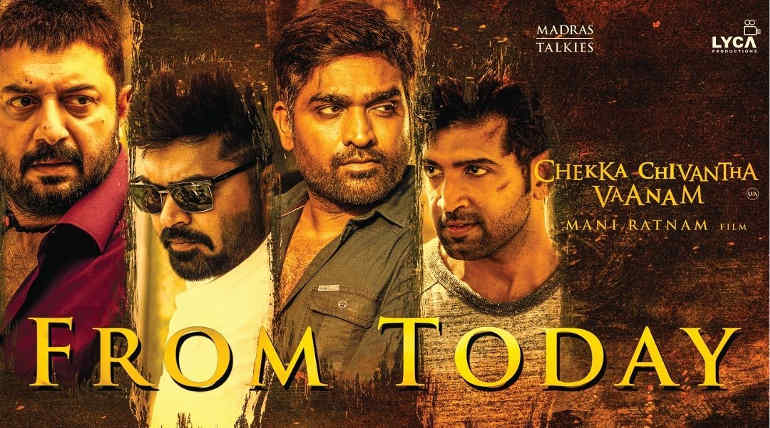 Maniratnam after a long time comes up with a multistarrer film and this time with a huge star cast of intense performers Simbu, Vijay Sethupathi, Arvind Swami, Arun Vijay along with Jyothika, Aditi Rao Hydari, Aishwarya Rajesh and debutant actress Dayana Erappa. But did the gangster drama meet the huge hype and expectations of the audience? Go on to find out in the spoiler-free review.

Mani didn’t take much time to get into the story as the film certainly starts with the same shot as shown in the first trailer with the voice over of Vijay Sethupathi and the mob attack on Senapathy played by Prakash Raj, followed by the character introductions of the three sons of Senapathy - Varadhan (Arvind Swami), Thyagu (Arun Vijay) and Ethi (STR) giving an adrenaline pumping intro for the brothers.

From that very next sequence, the audiences were made clear about the plot of the film suggesting a heavy battle between the brothers. Rest all depends upon the shades of characters in the film and with a small knot, this time Mani plays the whole drama with the guessing game on the characters that apparently takes the story forward. Revealing much about the film doesn’t suit for CCV as the surprise factor is the key role that is probably going to satisfy all kind of audience.

The first half easily catches the audience eyes with a fast-paced screenplay and a suspenseful treatment filled with action sequences where Vijay Sethupathi is the comical relief easily ruling the screen with his subtle humour and casual acting as a friend of Varadhan and a Police officer under suspension. Setting a standard lead for the second half, the interval block ended with a high note after which the second half can be easily guessed as the battle between brothers driven with vengeance, emotions, love, betrayal with scoring moments for all the leads to stealing the show.

Though the film has some pace issues at the mid part of second-half comparing to the high-speed first half, the pre-climax and climax portion stand out and that’s where the legend proves why he is the best infield by giving a unique treatment. The female leads though doesn’t have much screen time, as the story revolves around the brothers, they tend to give their best in their scenes and the vintage performance of Jyothika can be seen in an important sequence. Dayana Erappa and Aishwarya Rajesh filled their characters with the needed quotient of performance.

Another pillar of the film is undoubtedly the music by ARR, shows his combo with Maniratnam is always the best of all and drives the movie with a different feel like a never before experience for an MR film. The song loops of Bhoomi Bhoomi and Sevanthu Pochu Nenju takes the film throughout the narrative and two unreleased tracks apparently turn as a surprise and sounded great with the visuals. Hope the team release it soon.

Apart from the character portrayals and the making of the film, the moment which makes the entire audience go crazy is the epic ending with a new dimensional treatment for the climax simply nailed it by the filmmaker showing a grandeur factor unfolding his whole writings in a conversational pattern between all the leads of the film.

Maniratnam never comes back like people say, as he is always in his own league. But this time it is fair to say the emergence of Maniratnam 2.0 using all his skills, made a powerful mainstream gangster flick with a unique treatment which is a feast for Maniratnam/Cinema fans an also engages the secret Maniratnam film haters who expect mixed bag elements that are offered by this story naturally!