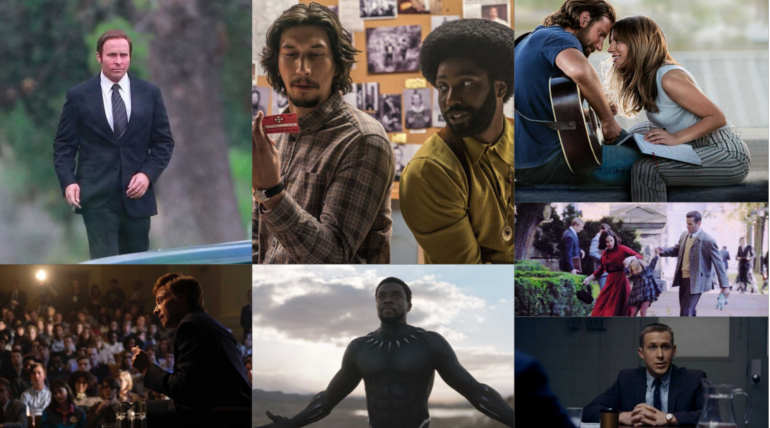 The end of the year is nearing and most of the top anticipated movies of the year had completed its screenings at various locations like Film Festivals and also theatrical release. Some films which haven’t been much expected have also surprised the audience with top-notch content and making which made the Oscar more competitive for the nominations. No wonder it’ll be a huge task for choosing the best out of all.

The recently screened film A Star is Born in the Toronto Film Festival has received a huge acclamation from the critics and it is so far considered as the people’s favourite for the Oscar’s most coveted title and while the musical drama is directed by Bradley Cooper himself. Next to that Damien Chazelle’s First Man has promised a top spot in all its screenings for critics and in film festivals and is believed to make it to the nominations without a doubt.

BlackKklansman is the latest addition to the cult film list of Hollywood and the film got reception in the box office too along with the great critical reception. One of the best deserving films of this year is directed by Spike Lee is awaiting a lot of recognition after his Cannes award earlier this year. Front Runner, the biographical film of former American Senate directed by Jason Reitman has made a strong impression with the special screenings and also good character portrayal by Hugh Jackman.

Marvel for the first time is trying their best to make their Oscar sealing with their top received film of the year, Black Panther. The movie was so far known as the top reviewed film of Marvel and the movie is sure to give their entry as a surprise to the other films being a superhero film. Also, the biopic of Dick Cheney tentatively titled as Vice contains positive reports that make it enough graduated for the list of nominees.

Apart from the above said films more than a dozen films are in the belief of making it to the coveted list at least to make it with the list in the prestigious ceremony. Films like If Beale Street Could Talk, The Favourite, The Ballad of Buster Scruggs and the biography film of Ruth Bader Ginsburg named as On the Basis of Sex are the promising contenders that are considered as the probable list. With Ad Astra and a few more films are expected to hit screens this year, more changes are expected in this list.