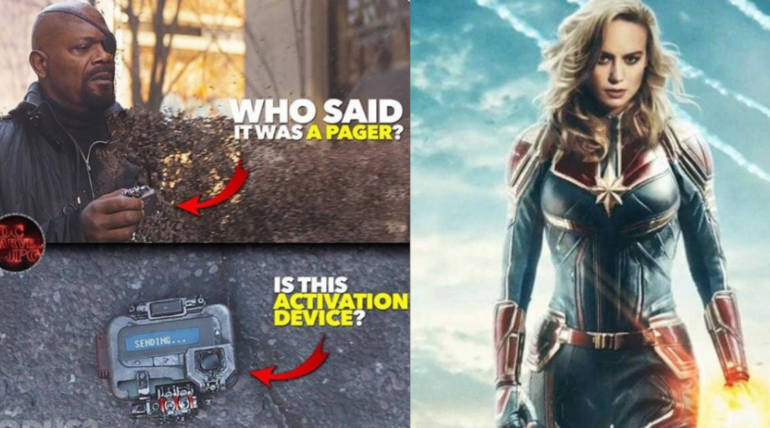 Fan theories are flowing for the Avengers: Infinity war film since its release sharing many ideas about the return of superheroes and the plan of the Avengers against Thanos. The recent Quantum Realm theory through Ant-man and Wasp film was one hell of a stunner from the fans as it suggested a mere possibility of happening as per the logic.

Dc.marvel.jpg a fan page in Instagram posted a theory that gives an idea about the scene in the ending of Infinity war that shows Nick Fury (Samuel L Jackson) sending a message through a device looking like a pager showing Captain Marvel symbol at the end. The fan theory suggested that why should the device be a pager and not an activating device.

It explains that it might be a device that just activates Captain Marvel to enter the world. Where has she been all these years? If she was free on earth somewhere, she should have seen the incidents happening and the battle of Thanos that would have provoked her to enter the battlefield.

This made us think about her condition and the way of getting her back. She might have been in the Quantum Realm or possibly in an evacuated place for some reason. During the climax portion of Infinity War, we can see the small device showing the text ‘sending…’ and later displayed the logo of Captain Marvel.

These fan theories day by day is just increasing the curiosity of the film and it shows the way the audiences are excited and thinking various possible ideas to be executed in the upcoming Infinity War film. The Ant-man and the Wasp gave a further boost to the fans by showing Antman in Quantum Realm at the end and we have to wait for the “Captain Marvel” film releasing on March 8, 2019, to get an idea about the actual theory behind the Endgame of Thanos and Infinity War.

The theory is very simple. Do you think Captain Marvel would not have seen without Nick's message that some shit was going on? I think she would see. Description E. X. O. D. U. S. is very similar to captain marvel. I think that now Carol is in prison (perhaps in order not to hurt someone). For starters, where has she been all these years? Why didn't anyone see her, even when the planet was in real danger? She could be in the Quantum Realm, and the device that Fury holding is a simple activator to get her to Earth in case of some danger. Just theory.