Northern California will face heavy rain shortly, which could help the firefighters to put off the fire and change the hot climate.  They may be possibilities of mudslides and the recovery attempt would become problematic.  The latest total numbers of deaths were about 86 and the missing people were more than 550 according to the latest report.  This is absolutely the most devastating wildfire that has caused most destruction in the city, according to fire operation Chief Josh Bischoff.  Green Bay Packers quarterback Aaron Rodgers announced that he is ready with $1 million dollars to California Wildfire Victims.

Many residents of Paradise have taken shelter at the Walmart parking lot in Chico on Nov 14, 2018.  Though Bob Phibbs, a retailing consultant in NewYork opined that it is better if the Walmart prepares to empty the people, but another retailing consultant Burt Flickinger III, said to keep the lot open to evacuees in spite of the adverse bounce on store sales, tolerance and generosity stand in the front.

Concerned about the critical situation of the homeless people, Walmart spokeswoman Delia Garcia opines that the cooperative work of the city, state & federal officials and local non-profits to expand the local shelters for the affected people is the need of the hour now.  But the evacuees have been unwilling to move to Gridley, to one of the shelters offered by the officials saying that is too far from their homes and raised their concerns about the infectious norovirus, as this has been spreading on the sheltered evacuees.

The Fire in Los Angeles County had an assurance of 100% containment, firefighters were able to complete a perimeter around the fire and stop it from spreading. In Butte County, 85% contained and 83 deaths confirmed.  In Woolsey fire 100% containment and 3 deaths confirmed. FEMA told ThinkProgress in an email that 120 individual had been provided with hotels through FEMAï¿½s Transitional Sheltering Assistance Program.  This program pays for the hotel sheltering for the people who need emergency help. 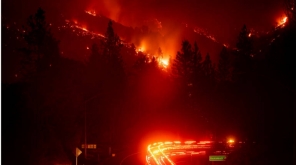