When it was speculated to be released then and there by various sources, it is officially confirmed by the leaked posters of both the films now. The posters of both films separately revealed to be released on January 10, 2019, for the auspicious Pongal festival. Rajinikanth and Ajith Kumar are having a face to face clash with their next big films. 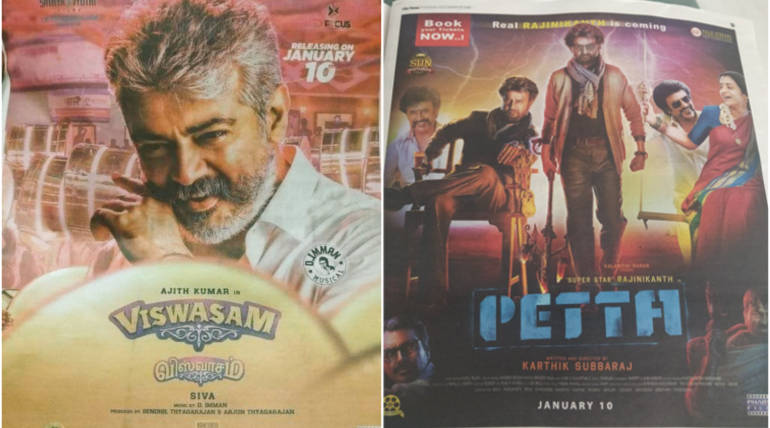 Superstar actors with huge fanbase always prefer solo release without big clashes to utilize the fullest star power in the box office. After the arch-rivals Thala and Thalapathy clashed on the same day with their films Jilla and Veeram back then, now for the same Pongal day, here comes another big clash of the decade.

The hype for both the films is at the peak while Thala Ajith's Viswasam is having high expectation even before a video glimpse from the film is released. The teaser of the film is expected to be dropped by New Year night and deliver a New year treat for the fans from the successful Siva â€“ Ajith combo.

Petta which had its teaser released on actor Rajinikanth's birthday has a pretty great hype for the star cast and a mighty new combo. The trailer of the film is releasing on Friday after the teaser showed just the glimpse of Superstar in his birthday Treatser. Now all eyes will be on the upcoming promos from the films and the opening box office numbers of both the films.