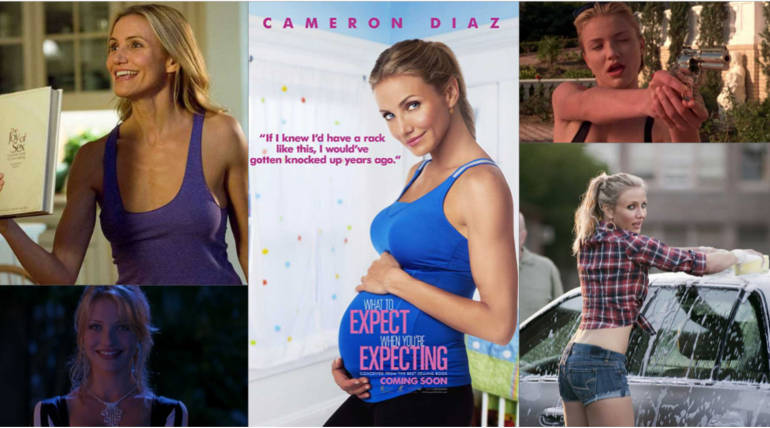 The ever beautiful talented actress Cameron Diaz celebrates her 45th birthday today after retiring from her acting career in 2014. The actress has a pretty huge stardom for her kickass performances through which she arrests the audience with her magnetic blue eyes and the engaging roles she plays in her films.

Cameron had an adventurous life in her young age during which she left the home at the age of 16 and lived in many counties like Japan, Australia, Mexico and Paris. At 21, she returned to California and started her career as a model and entered Hollywood after auditioned for the lead actress role in “The Mask” opposite Jim Carrey that gave her a big launch in the film industry. She impressed in her debut film with a distinct attitude and alluring performance as a bar dancer in the film.

Films like ‘My Best Friend’s Wedding’, ‘There’s Something About Mary’ in the initial stages gave her a big boost to establish as an actress followed by a series of rocking roles in various films. To mention some of her memorable roles apart from her stunning visual attraction in each film and her acclaimed performances like in Gangs of New York, Being John Malkovich and Vanilla Sky this time thinking of speaking about some characters in which Diaz slew with her kickass attitude and made everyone crazy.

What Happens in Vegas

Joy Ellis McNally is her character who meets the lead actor in Vegas by chance and hook up for a night and end up marrying accidentally after getting fully drunk. After winning the joint lottery they were forced to live together for six months until getting divorced officially for half the money. The conflicts between Joy and Ashton Kutcher in the film and the hidden love for each other is heartwarming while Diaz just rules the screen whenever she attempts to perform with her expressions.

Though the film was critically a dull movie lacking pace in the screenplay, the movie was praised for the outstanding performance by the talented cast that includes Cameron Diaz along with Kate Winslet, Jack Balck and Rufus Sewell. She played as a business executive, dealing with distress due to the break-up with her boyfriend who cheats her and the way she shines in each and every frame was lovely even without a solid story. Her performance in the film was top-notch at both romantic and emotional sequences especially the delighting climax.

Probably this is one role which she was seen as a pretty girl with a joyous attitude throughout the film along with Tom Cruise. June Havens is the character name who somehow gets involved in a CIA case gets to travel with Tom Cruise as Roy. June is an innocent with the needed courage to go to any extent to get her love. Though she made audience go awe with her performance throughout the film, the climax was one hell of a memorable sequence for Cameron which is enough to show her magnetism onscreen with damn cuteness.

The film completely revolves around her character Halsey, an immoral English teacher who is foul-mouthed, greedy, heavy drinker and smoker and shows movie while sleeping in class. She portrayed a completely different role with ease of her charm and sexy attitude that made the film watchable. She received huge positive acclaims for the role being pulled off with a swag, though the movie met with mixed reviews it was a commercial blockbuster. This is the only film she produced in her career and made it bankable single-handedly by ruling the screen.

She was on a rise right from her debut and did continuous films each year choosing roles that had importance and provided performing space for her. The way she gives a peculiar dimension to each role she plays is what gained her the deserved reception among the audience. Along with these films, Charlie's Angels Franchise, Full Throttle, The Sweetest Thing, In Her Shoes were some films that made her a bankable actress. She is also an author and written 2 health books "The Body Book: Feed, Move, Understand" and "Love Your Amazing Body". Meanwhile, she officially bid farewell to the acting career in 2017, fans are still hoping to see her onscreen to get to see her charming performance through the films.