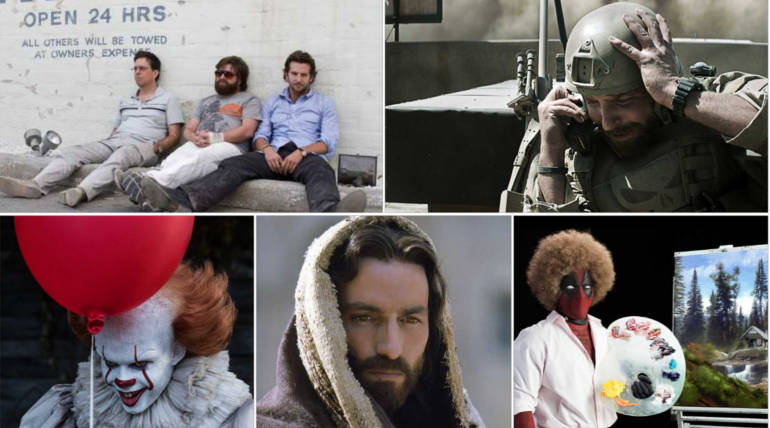 MPAA Rating is one main factor for a film’s box office contribution and the Motion Picture Association of America films plays a key role in the categorisation of a film to restrict the movie watching audience for certain films. Under each rating, there are certain disclaimer and rule for the audience while the R-rating defines the Restricted content which explains that people under 17 require accompanying parent or an adult guardian to watch the film. Now let’s see the list of R-rated films which acquired top 10 positions at the all-time box office under the category.

1. The Passion of the Christ

The film based on the story of Jesus Christ that shows the final twelve hours in Christ’s life in Nazareth before he was nailed on the cross. The movie is one of the best watched film worldwide that portrays Jesus Christ and the movie collected $370.7 million in the domestic box office and $612 million globally that marks a terrific figure for an R-rated film.

Marvel’s Deadpool is an Action, Comedy Superhero film that made a huge fan base for a new superhero film and opened with a great global reception making a total of $783 million worldwide and a domestic total of $363 million that makes it ranked 2nd in this list.

The biographical action drama is based on the story of an American Navy sniper Chris Kyle and how he saves the life of people with his accuracy and brilliance as an S.E.A.L sniper. The movie is directed by Clint Eastwood and it collected $350 million domestically and $547.4 million globally.

It is the top-grossing Horror film of all-time in the history of Hollywood and the movie also took in the common R-rated list of Domestic grosses meanwhile it is also the 3rd highest grossed movie of this rating globally after Deadpool and The Matrix Reloaded. It made historical run at box office setting the bars high for upcoming horror films making $327.4 million domestically and $700 million worldwide.

The sequel cracked the Hollywood fans big time by its same genre as the first part with spoof treatment written all over the film trolling every other Hollywood films and entertaining the audience. The domestic figures of the film come around $318.4 million and $734 million in the global market.

The second part of is a box office blockbuster and the best part of the Matrix series which is an action sci-fi film that gave a mainstream film in a sci-fi genre with action-packed spectacular making. The movie made $281.5 million in U.S box office and the worldwide was a huge $742 million.

Hangover is one of successful comedy franchise in the world with three parts and this first movie released in 2009 and had a surprising reception at the American box office making a $277.3 million total and a global figure of $437.4 million. The movie is one of the most awaited sequels due the entertainment factor of the film.

Second part though falls next to the prequel, the film made record collections at the global box office. It collected $254.4 million in the U.S. box office and $332 million at the international markets making a worldwide figure of $586.7 million as a best of the franchise.

The Crime Action comedy film is a cult blockbuster film starring Eddie Murphy as a comical cop handling a murder mystery. The movie is remains in the all-time best comedy films while it made $234.7 million in the domestic box office at the year 1984 with a worldwide total of $316 million.

The only horror film after IT making to this list as the top 10 films is the Exorcist which is an ever scary film and a trademark of a horror film that terrifies anybody at a watch. The movie was a big hit in the released year 1973 as the oldest film in the list making $233 million in U.S. and moreover an equal amount of $208.4 million internationally.