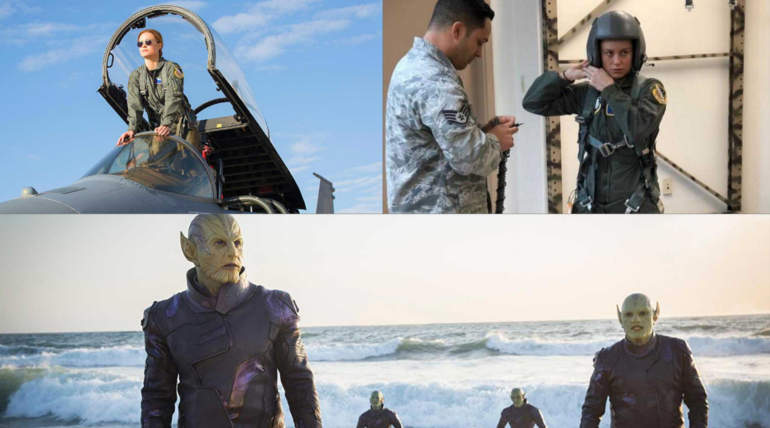 The Captain Marvel trailer released on Tuesday that made audience around the world wait for the film madly after the glimpse and it merely gave goosebumps that are already built up at the end of Infinity War and the trailer stands equal to that hype with expectations raised for a breathtaking superhero film. Here we bring some shots from the trailer that you would have seen, but not bothered by the narrative it hints about the film.

At the beginning of the trailer, it is shown like Carol falling from an Aircraft into a Blockbuster source that is famous in early 90’s for film watching experience before which the digital platforms arrived showing the movie will completely revolve around the 90’s authentically made in the period.

After the trailer gets speedy shots, Captain Marvel is seen in the civilian dress roaming around in which she was wearing a hat with the S.H.I.E.L.D logo. She might be working for the organisation secretly spying something that we would know what in the theaters.

The Beeper from Infinity War

The Beeper which is commonly used in the old period for communication is seen in a hand (probably Fury’s) but definitely not the same as shown in the Avengers as it looked somewhat old and it displayed the text With Target. This one makes to think that Carol may be under surveillance and target may be at the beginning of the film.

Not everyone would have thought about that Carol keeps falling on the ground throughout the teaser when she was young and while dawning the Air Force Fighter pilot uniform. Also, she is seen stumbling while young and climbing a rope revealing there is some mystery in her stability.

None would skip this sequence from the mind as it made everyone curious when Carol punched on the face of a Granny. But wait for a moment and think that should it be a Granny first of all? The Skrulls are seen in the trailer and if she can identify Skrulls at any form or she would have eventually identified a Skrull disguising as an old woman.